Posted on April 3, 2011 by jasminebelgrave 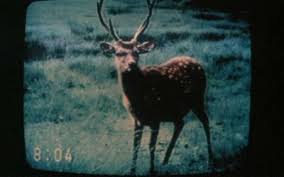 The film that I will be responding to this week is Sans Soleil.  This film is an essay film that was made in 1983 by French filmmaker Chris Marker.  This movie has no main character or main plot.  In this essay film the narrator is a former camera man that is reliving his journeys to Africa and Japan.  This film discusses the theme of memory.  Many scenes in this movie explicitly show the main theme of the film.  One such scene is a scene when the narrator is remembering one day watching something on television.  While watching the television the narrator begins to see the commercials that he is watching as if they were coming together and blending into a haiku.  The director uses images of nature because haiku are usually about nature.  Some images that the director uses are a lake and a deer grazing in a pasture.  I believe that an essay film is an appropriate form for exploring this theme because by using this form you can go from one memory to another without have to incorporate that memory into a storyline of any kind.  This form gives the filmmaker freedom to do what he or she pleases with the footage that they have compiled and will use for the film.