Oh What an Afternoon 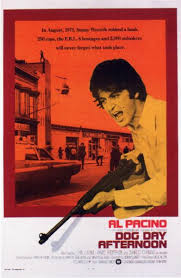 The films of New Hollywood were groundbreaking, influential, and, in a word, new for that generation of movie goers. This era bore many great films as well as filmmakers. These filmmakers were educated on the matters of film and counterculture. They introduced techniques such as realism and used editing to a degree which no one had ever seen before. Advancements in film technology, such as 35mm camera film, also made it easier to location shoot. Not only was this cheaper then building sets, but it also added to the realistic affect that these New Hollywood filmmakers were going for. The films of this era also portrayed a lot of subject matter that would have never been put on the big screen prior to this generation. A perfect example of all these qualities and new advancements is the film Dog Day Afternoon.

Dog Day Afternoon (1975), directed by Sidney Lumet and starring Al Pacino, is a true story about a man, Sonny, who robs a bank in order to obtain enough money so he can pay for his boyfriend, Leon’s, sex change operation. This, in it of itself, is an example of the aforementioned subject matter. No movie before this New Hollywood era would ever have portrayed a gay relationship and the need to have a sex change operation so that it may thrive, and if it did it would scoffed or giggled at. This is one of the first films that took a gay relationship on screen so seriously. When the audience is made aware that the reason he robbed a bank was for his boyfriend’s surgery it almost seems like a romantic gesture. Had the robbery been for a mother with a brain tumor or a wife without functioning kidneys there no doubt would have been “Oooooohs”, “Awwwwws”, and a couple of “So sweets”.

Crap, I see I’m already at 311 words so I’ll have to wrap this up. The film also contains language. The first “Fuck” of the movie is followed by only a moment of silence. It lingers overhead until silence is broken and conversation ensues. This language is new, exciting, forbidden, and of course monumental to New Hollywood films. Also when the oh-so-professional bank manager swears he apologizes to the women tellers for the use of such language to which they reply with giggles and smirks. There is much realism in the movie, seeing how it is a true story, but the natural lighting adds to the realistic effect on the film. Another concept in this film is that of the 70’s attitude of “sticking it to the man”. The crowd that surrounds the bank cheers Sonny on as he wildly screams “Attica, Attica”, recounting that the cops had killed many people in Attica only caring about themselves and their jobs. The multi-ethnic, multi-cultural crowd seems to only want to put the cops down even if it means agreeing with an armed man holding mostly female hostages in a bank.

This is a great film about the hardships of life, sticking it to the man, and it’s even about love. This movie is a prime example of the New Hollywood era and the techniques and advancements it brought into the film industry. I recommend it to any and all who want to study a great New Hollywood film, see another film with their favorite actor, Al Pacino, or just have a good time.

This entry was posted in Film Response 02/23, Uncategorized. Bookmark the permalink.

2 Responses to Oh What an Afternoon